Got it home, wife says "Darling it's noisy" took it to Carline Mufflers only to find it had a 3 inch system with NO MUFFLER.

Took it to my mechanic got it a full service and new rear brakes, mechanic said everything is 100% except for the wiring under the bonnet.

Get a recommended Sparkie went to my newly purchased Snowy River SR18 caravan with the sparkie and he wired the car for the vans reversing camera and
installed an electric brake controller, he looked under the bonnet and nearly fainted at what he found, fixed the spagetti under the bonnet remover the 2 amps
behind the rear seat, the 12 inch sub woofer and 2 tweeters all the wiring to them, put conduit over the exposed wiring and replaced the bare wire with 12 inches of
insulating tape on it, sparks under the dash and relocated a fuse box that was on the wrong side etc. $1700 later I'm now thinking of going Lithium!

My mechanic replaced the EGR valve.

3 days later the check engine light came on again, straight to my mechanic, EGR fault code again, cleared the code said keep driving and see if it comes back on.

Left there and only had about 1 quarter power realised I don't have any turbo boost, checked all the vacuum lines etc nothing I can find wrong with them.

Back to my mechanic to fit a Mann & Hummel Catch can and fix the boost problem.

I'd rip my hair out if it wasn't so short!

More to come, stay tuned for the continuing saga! 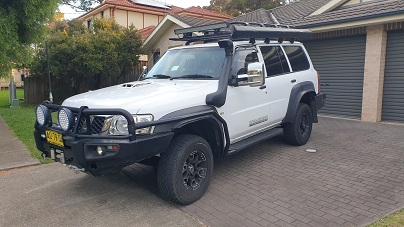 Less More
1 year 6 months ago #1551 by Garry
Replied by Garry on topic 2008 Nissan Patrol Problems
How did it pass a roadworthy with a faulty exhaust system?

Less More
1 year 6 months ago - 1 year 6 months ago #1564 by Bikinis not Burkas
Replied by Bikinis not Burkas on topic 2008 Nissan Patrol Problems
The Saga continues:-
Catch Can fitted mechanic couldn't diagnose the Check Engine light fault.
Went to 4x4Supercentre and bought a Engine Scan gizmo, fault codes were P0400 generic EGR fault needs further investigation going to Chip Tuning Seven Hills on Monday 24/5/21.
Next code P1409 which is Turbo boost control solenoid, cleared the codes got the turbo boost back, check engine light came back on.
Drove to Newcastle today 13.66 L/100K, picked up the solenoid will get it fitted on Monday, then I'll see about getting some goodies installed!
chiptuning.com.au/product/chip-tuning-performance-module/

The Saga will continue Monday night!

What's the go with the new members names?
Last edit: 1 year 6 months ago by Bikinis not Burkas.


Those accounts never pass the Spam Test, and are deleted Daily.
P.S. These attempted registrations originated from Russia.
The fake accounts yesterday, came from the EU.
Last edit: 1 year 6 months ago by Garry.

Our Australian Forum is a handy way to let others know what's on your mind, and perhaps strike up a conversation.

Anything posted on this forum, is the sole opinion of the poster, and they take full responsibility for their own actions, and furthermore, GrumpyGreyNomads.com can not be held responsible for their posted comments.
However: If you find something not to your liking.